I'm back for another Wordless Wednesday Blog Hop!
Thanks again to Focused on the Magic and the Info Mouse for hosting!
Let's check out another delicious treat from my Disneyland trip shall we? 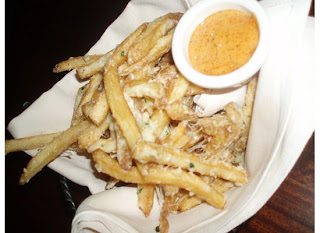 YUM!  Garlicky cheesy fries from Cafe Orleans!
I will say that these would have been MUCH more delicious if they hadn't been cold.  It made them taste too salty.  Had they been hot it would have been PERFECT.
But the dipping sauce did save them a bit.  And even mediocre fries are better than no fries at all right?!
Now hop on to the next stops!

I am using this as my first ever contribution to Heidi's Destination Disney - Quotes Series Part 1 because this post describes entering the West Coast version of "the World of Yesterday, Tomorrow and Fantasy." :)  [Although I object to the lack of the Oxford comma in Disney's sign because I'm a grammar nerd like that lol]

Have you ever been somewhere or seen something and thought "I KNOW I have never been here/seen that before, but I must have dreamt about it because it feels SO FAMILIAR"? 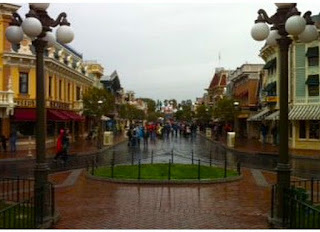 That is the feeling a WDW "native" will get when she walks down Main Street USA in Disneyland.  The feeling she gets when she reaches the hub and sees the castle is "THAT'S IT?!?!?!"  Can you see it in that picture above?  It's the tiny pink smudge wayyyyyy down in the center.  Compare that to what you normally see of Cinderella castle from the same vantage point in Magic Kingdom.  Here's a "close up": 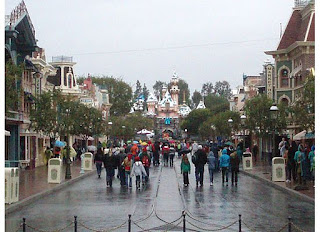 Look how tiny!  It looks like I could fit it in my pocket!  It does NOT tower over the rest of the park like Cinderella's Castle in the Magic Kingdom.  You know what does?  The Matterhorn.  Which only serves to make the castle seem even more diminutive.  But I do like that it is pink.

The other thing that was going on when I first entered the park was the filming of the Christmas Day parade.  I was naively hoping that going to DL so early in November meant they would be just taking down the Halloween decorations and not yet ready for the Christmas decorations (I wanted an unadulterated first experience - the "original" flavor so to speak).  Not so, thanks to that speedy Disney magic.  The Christmas decor was up and the filming was about to begin! 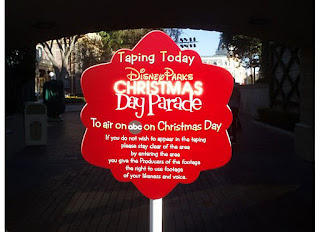 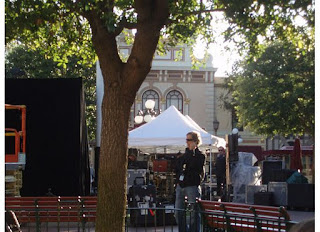 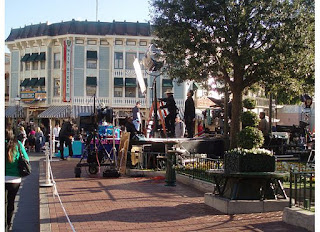 We didn't stay to watch the parade (obviously this was a great time to enjoy some reduced lines while everyone else crowded the hub and Main Street decked out in Christmas gear), but I did get some great shots. 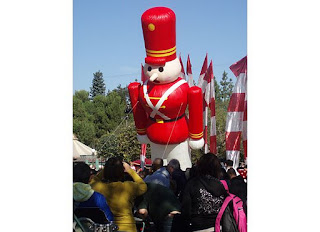 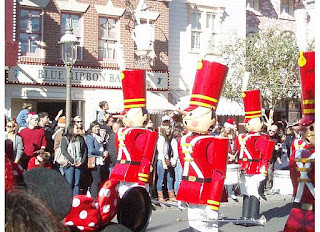 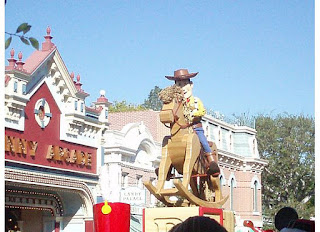 We didn't see Nick Cannon but we did hear about him being there.  And the announcer would say stuff like "Okay folks, we're going to film that again and this time I want to hear your jolliest Christmasy cheers!"  It was annoying to navigate around the equipment and crowds, but still kind of cool to see how such an event goes down! 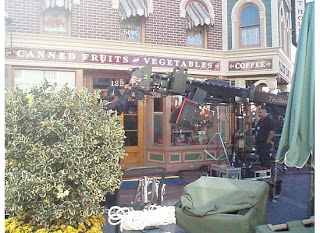 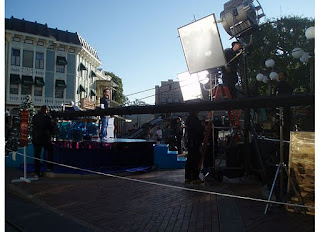 Thanks for reading and stayed tuned for more posts on my fabulous Disneyland trip!  And hop on to the next DD stop by clicking on the button below!

Disneyland Trip Recap Part 1: Hotels (and Not So Wordless Wednesday) 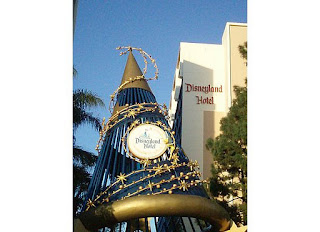 Welcome to another Wordless Wednesday Blog Hop!
Thanks to Focused on the Magic and the Info Mouse for hosting!

So the plan was to visit my little sister out in LA (which I suddenly LOVE after years of being an elitist East Coast snob (ok fine I'm still an EECS but I do adore LA now too)) and spend 3 days/2 nights in the Happiest Place on Earth.
We drove down there and stayed in the Disneyland Hotel one night and the Grand Californian the second night.  I wanted to try each of those hotels and, having heard not great things about Paradise Pier, wasn't interested in staying there.  Plus the theme doesn't appeal to me (just as with the Boardwalk, Beach and Yacht Club; I live in New York so I am within a 2 hour driving distance of boardwalks, piers, beaches, and yacht clubs.  I don't need to stay in a hotel with such a familiar theme when I can get the real deal at home). 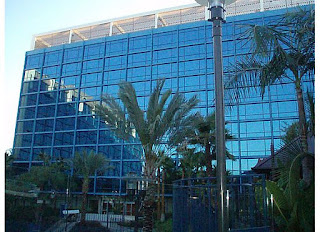 The pool (too cold to swim in): 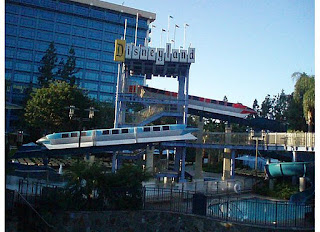 My fabulous travel agent at The Magic For Less scored me a discount on the hotel room AND a free upgrade at the DL hotel!  We had a FANTASTIC view of the pool from the 4th floor of the Adventureland Tower.  Since the hotel had recently had/is in the process of getting a renovation, I can officially state for the record that the DL hotel wins hands down for the better room.  It was new, it was clean, it was fresh, and it was PRETTY.
My view from my giant, baller hotel window! 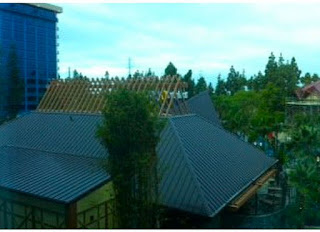 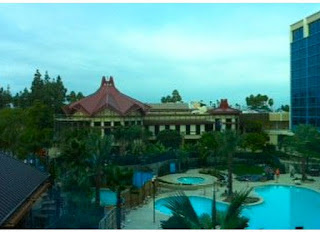 Have I mentioned that the headboard lights up AND plays "When You Wish Upon A Star" when you press a button on the middle bedside table?
Before: 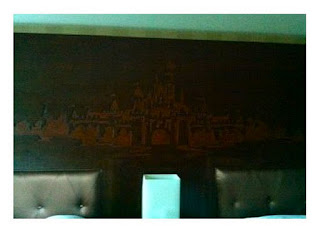 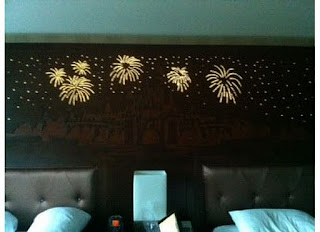 The Grand Californian reminds me STRONGLY of the Wilderness Lodge.  I didn't dislike the decor at all.  Everything was extremely well-themed.  But the room was not as nice or new or fresh.  For one thing, the green and browns are deep and kind of depressing.  Not like the sharp silver, navy, white and gold accents of the DL hotel.   Plus, I am ALSO a 1-2 hour drive away from upstate New York where the Arts and Crafts architectural style is prevalent, so as it turns out, the GC (and Wilderness Lodge) are also "themes" I can get at home. 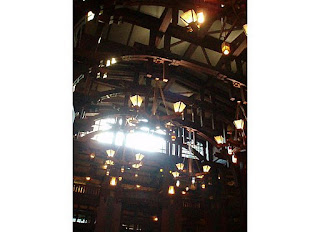 The other thing that weirds me out here is when there is a sink with carpet underneath.  I get that Disney does this to accommodate families piling into one room to save money, but I don't like it.  It's creepy to me.  It's like having a toilet with carpet underneath (wouldn't that be creepy?  That carpet area could NOT be clean!).  The DL hotel had a proper bathroom with a shower/tub, sink, and separate toilet area with a door that closed - all with tiles on the floor. 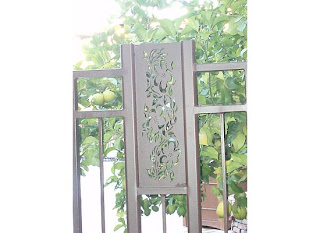 That being said, the Grand Californian wins hands down for theming.  The DL hotel is a hotel.  It's not an experience.  It's a very nice hotel, but that is the theme: hotel.  The Grand Californian makes you feel like you're being transported to the redwood forests up north. 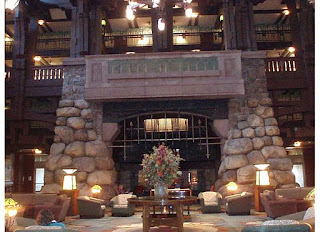 Another bonus to the Grand Californian?  Turn down treats!  I miss the tradition of a pre-bedtime turn down with chocolates on the pillow.  Lots of hotels (including Disney's) have done away with this nicety to save money.  Not so at the GC!  I ate my chocolates before I took a pic of them, but they were just simple chocolate disks with colorful metallic wrappers with classic Disney characters on it.  Kind of like gelt money.  It was SUCH a nice touch.  :D
Thanks for reading and stay tuned for more Disneyland trip reviews!

I'm back for another Wordless Wednesday Blog Hop!
Thanks again to Focused on the Magic and the Info Mouse for hosting!

I know I've been negligent in posting since I've been away but I am about to make it up to you riiiiiiiiight NOW!
Are you ready?
You suuuuuuure you're ready?
BAM! 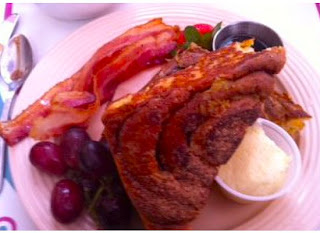 Cinnamon Bun French Toast from Carnation Cafe.  Ready for another one?
BOOM! 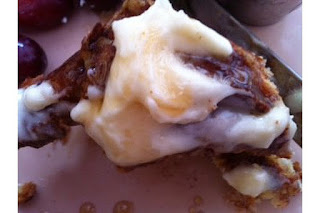 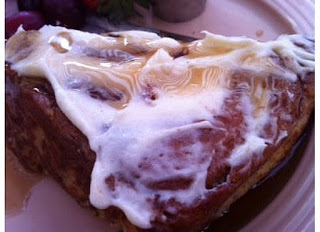 Are you drooling yet?  It was delicious!  And now some scenery shots of the lovely Carnation Cafe 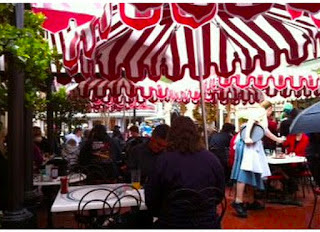 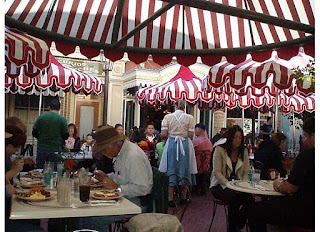 I PROMISE you new amazing content from my Disneyland trip is coming.  I am so busy right now catching up but I swear it's on its way.  In the meantime, I strongly suggest you hop on over to the Progress City blog, and check out this entry.  It basically sums up my position on most things Disney.  That is,


"Nostalgia for and the push to revive these little things goes to one of the core reasons typically cited as a secret for Disney’s success – a focus on detail. Anyone who grew up going to the parks knows how easily one can become fixated on some bizarre, out-of-the-way detail. With so many fascinating design elements populating the parks and resorts, it’s not hard to find something that enthralls you and becomes “your” personal, private touchstone. It can be something as remarkably mundane as a staircase or a hexagonal bathroom tile, but it’s something you look for every time you visit; it draws your eye, and it almost becomes ritual. And this is why, when things like his are lost, it detracts from the overall experience and the reaction from fans can be highly personal. The most stinging wound comes when things disappear without any replacement whatsoever. This attrition has hit the Magic Kingdom hard over the years; rides were shuttered without replacement, restaurants like the Adventureland Veranda sit disused, and even fan-favorite snacks disappeared in the endless waves of menu downsizing. " [Emphasis added].

I am back from Disneyland/LA and, you guys, I had the MOST INCREDIBLE TIME.  LA is now tied w/ DC for my favorite US city.  I can't wait to share all my pictures and experiences with you guys so GET READY for a ton of new, exciting content!

Hey guys,
Sorry I have been kind of MIA.  Work has been CRAZY!  And now I am off to Disneyland!  Keep an eye out for some awesome pics and posts after I return!
Posted by V @ No Privacy At All Around This Place! at 2:10 PM No comments:

My friend Alison has about seventeen thousand purple dresses.  We are not sure why but she keeps buying them.  Every time she gets another one, it baffles me - yes they are all slightly different but doesn't she already have enough purple dresses?  Isn't it time to branch out to maybe a blue dress or a pink dress, or maybe even -gasp- pants?  But nope, she keeps buying purple dresses, God love her.

That's pretty much the same way I felt when I heard about Avatarland.  Disney already has a bunch of great franchises (Star Wars, Indiana Jones, Muppets, and, much as I hate it too, Marvel) not to mention a slew of wonderful original movies and characters.  Did they really need to acquire another one?

Yeah yeah yeah, Avatar is a semi-decent match for Animal Kingdom which has been screaming for expansion since day 1.  Yes, I am aware that Disney was worried that Avatarland at Universal would be that one-two punch with Harry Potter land that would just knock Disney out [insert derisive snort here].  Whatever.  Smart businesses are cautious but do not make reactive choices out of fear or paranoia.  Be confident in your own abilities, Disney, and your stellar track record!

In sum, Disney, did you really need that new purple dress?  I'm pretty sure you have a closet full of them already.
Posted by V @ No Privacy At All Around This Place! at 9:08 AM No comments:

Welcome back to another Wordless Wednesday Blog Hop.

I'm super busy but I couldn't pass up a WWBH themed to snacks right?!
How about some of that famous Disney fudge to nosh on? 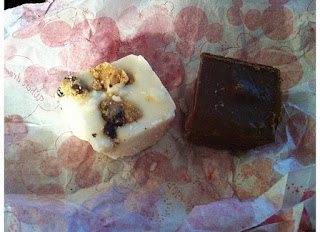 Thanks to Focused on the Magic and the Info Mouse for hosting!